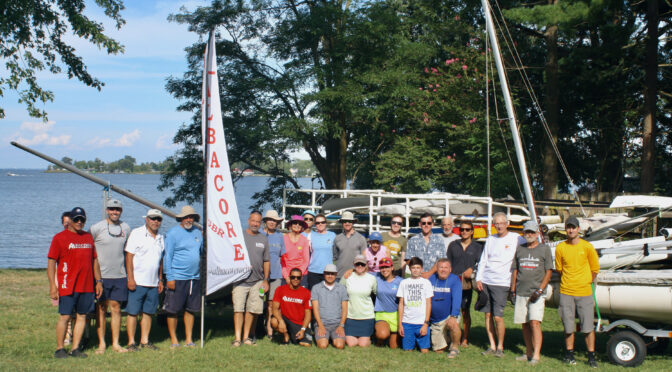 The 93rd Billy Heintz Regatta hosted by West River Sailing Club took place September 3rd and 4th 2022. Thirteen Albacores competed over two days of racing. Day one of racing had 5 windward leeward races in light breeze with a sunny blue sky. The breeze ranged from seven to ten knots in shifty conditions which was better than the predicted forecast. At times there were 30-degree shifts, which kept the fleet on their toes. Some boats lost while other boats gained in the shifty conditions. Downwind for the fourth and fifth race was tuff with the light breeze and the sun blasting competitors. The only controversy from day one racing was when AL 7492 fouled AL 7970 at the start of a third race in a port starboard incident at the start of the race. This caused a few boats to pile up at the pin of the start line and sailors to ponder why other boats do what they do at times.

Day two of racing brought five races and more breeze than day one. The breeze ranged from eight to fifteen knots with crews hiking upwind all day. Boat traffic was another added element during day two racing. At times it looked like rush hour with non-racing boats zipping through the race course to the dismay of racers.

Ten races total were raced for the event. In addition to the top three Albacores receiving awards another award was given out to an Albacore. The Billy Heintz Memorial perpetual trophy was awarded to first place finisher in the class with the largest number of registered competitors for the regatta.  And a shoutout to Scott Titus for bringing his boat up from Ware River for the event.  We look forward to seeing more Ware River boats traveling to events!