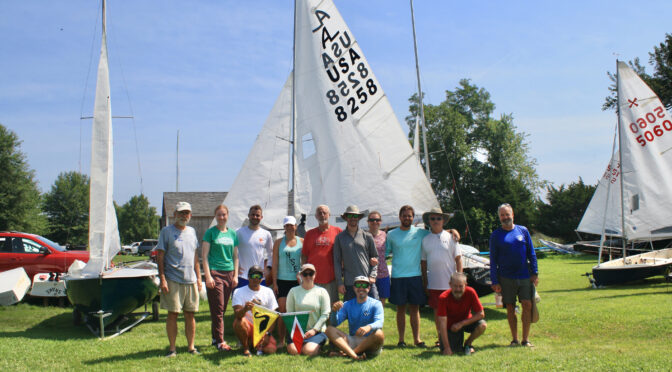 While camping with a low of 76 degrees overnight is not my favorite thing to do, the Corsica River Regatta did not disappoint.  We had 7 Albacores show up including Elvin with his boat looking like it came fresh off the assembly line (at least from how shining the white gel coat looked).  There was actually a fair bit of breeze too which was unexpected with the highs of 98 the weekend promised.

CRYC had us race just before the mouth of the Corisca River into the Chester river which gave us some pretty nice wind coming off the Chester River that did not appear to actually be in the Chester River.  At the end of the first day racing was quite tight with a tie for first place.  The second day began with an on shore postponement but the wind filled in around noon around 5-10 knots but was a bit more shifty coming off the land.  With the high temperatures, the Race Committee was watching out for all the sailors and had us do 3 races each day.

As usual, the Corisca party was a lot of fun.  A blue grass band was playing when we got back on shore and played through dinner.  The dinner was very tasty and the libations were flowing.  Hanging out at their club area under the ceiling fans was quite nice.  Camping was better than it could have been with a little bit of breeze most of the night.  Other than being a little warm (except Barney who claims he froze himself since he could not figure out how to turn off the AC in Spot) for the camping the regatta was a great time!