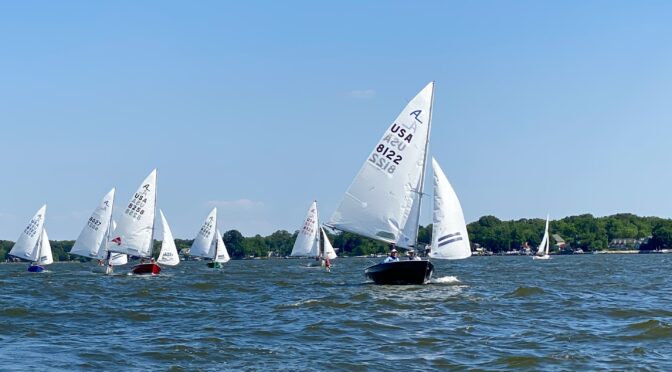 Last weekend, Farley and I sailed Albacore 8122 in the annual Dave Irey regatta at West River Sailing Club (WRSC). There were 8 Albacores registered and it was great to have a new team with a new boat on the water racing. WRSC is one of the prettiest venues to sail at on the Chesapeake Bay and it’s convenient coming from Washington DC because you don’t have to cross the Bay Bridge.

Saturday started off light and the Race Committee postponed on land which gave me the opportunity to catch up with some other sailors and play Wordle overlooking the view. After one quick course location change, we sailed 4 great races Saturday afternoon. The Race Committee balanced getting races off after our postponed start which I enjoyed. We forgot our compass so we were reading the shifts based off feel on starboard tack and the shoreline on port tack. The sea breeze filled in throughout the afternoon which led to hiking and waves. Given the short races, strong starts seemed to be important. Also, Saturday afternoon brought motor boat traffic and with the breeze, I was conservative with our centerboard going downwind.

The race committee postponed on land again Sunday but for the opposite reason, there were gusts of 25-30 knots. As forecasted, the breeze subsided as the day went on and we raced later in the afternoon. We sailed 3 races Sunday. We found the course was skewed to favor port tack so we tried to start at the pin end allowing us to tack to port soon after the gun. There were other larger sailboats on the race course which impacted our tactical decisions to avoid or minimize the wind shadow as we approached the windward mark. Our downwind legs seemed to go well sailing wing to wing. After sailing and derigging, I took the opportunity to swim twice before heading back to the city.

WRSC put on a great regatta, we had made dinner reservations but the catered dinner looked great. Race committee by Constantine was excellent and I always appreciate the friendly faces from the WRSC members and volunteers. We look forward to sailing at WRSC again!