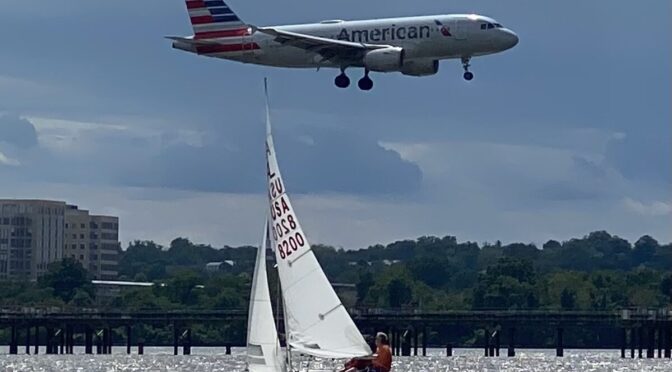 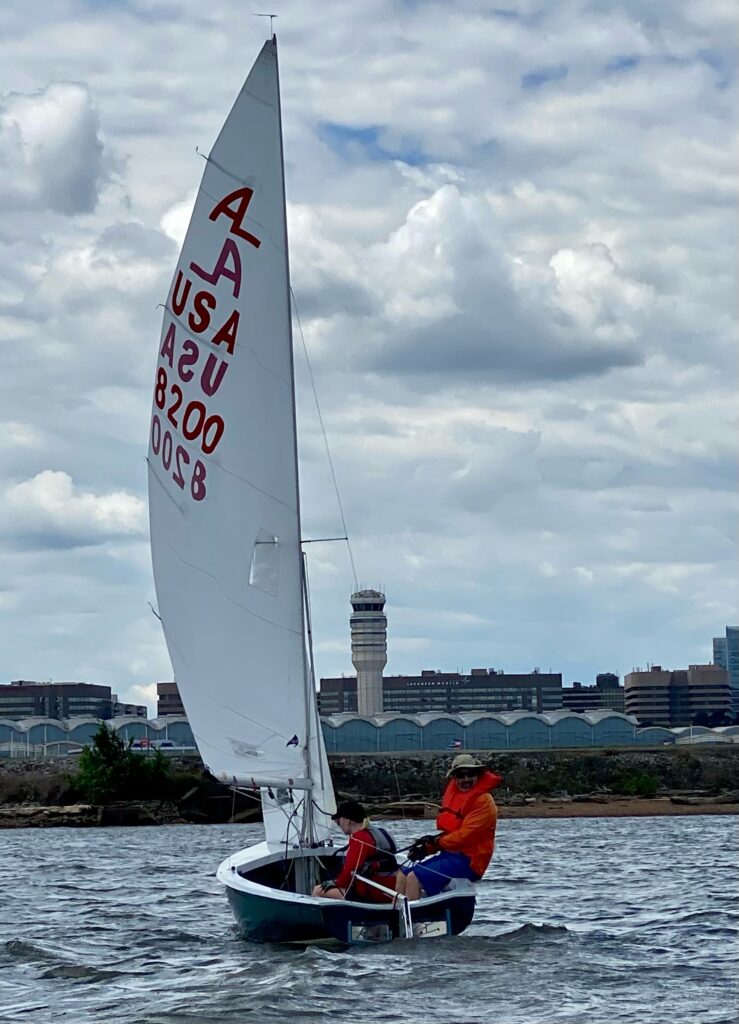 A few weeks ago, Barney Harris made Raines an offer to come down and race in the Potomac River Sailing Association’s Spring Regatta. It was one of those offers Raines couldn’t refuse – Barney was providing his Republican red boat, his house, pick up and drop off from the airport, and a lot of beer. Raines asked me to tag along knowing that I wouldn’t be able to resist getting into political arguments with Barney and possibly wind up epoxied to a dock.

The forecast was for light air on Saturday and even less on Sunday – but if you didn’t want to hike (like me), this wasn’t a bad thing.  Unfortunately, like pollsters, weather forecasters can be completely wrong with no consequences, and what we actually got on Saturday was a gusty 10-15 knots with a small craft warning in effect.

An albacore is an albacore is an albacore – unless it’s Barney’s, which has about 99% more control lines than what we’re used to. Writing down what some of the lines did was helpful, but that didn’t stop us from falling down a couple of times during tacks and gybes. It seemed like going left was the payoff move, but being Canadian and polite, we went right to stay out of everyone’s way. Eventually, with some skill (from Raines) and luck (being the ant infestation in the boat Barney was using), we got ourselves settled and Barney’s red boat squeaked out a bullet in the last race over Barney’s other boats,
giving us the lead for the day. Dinner was a huge spread of tacos, nachos, salads, cookies, and beer.

Sunday was one of those days where you discovered how cruel or kind the RC was. The wind was looking bleak (except for when the planes were landing), so the only decision was whether they would postpone us on land or make us go out. Fortunately, they went with the former, giving Barney more time to murder ants, and eventually they called the day off to the relief of many. And more tacos and nachos were served!

We got some very nice prizes, but the real champions of this regatta were the volunteers. I understand there was a four(!!!) person regatta committee with many more hands that pitched in to pick up the food, pack it away, set it back out, run the races, get the prizes, get the ice, and the list goes on and on. And it was an amazing event – there was a ton of good food, coolers full of Hapco-sponsored beer (that Raines orbited like a little moon), and lots of helpful and friendly people. It made me feel welcome and made me want to come back. I hope the volunteers all know how much the sailors appreciated the work (and plan to pay it back), and how proud PRSA should be of them.

Again, a huge thanks to everyone for their work on this regatta, and the biggest thanks to Barney for making this happen and for not watching us while we took 40 minutes to de-rig his boat.

Thanks to everyone who showed up.  We had a great turnout with 15 Albacores on the water!