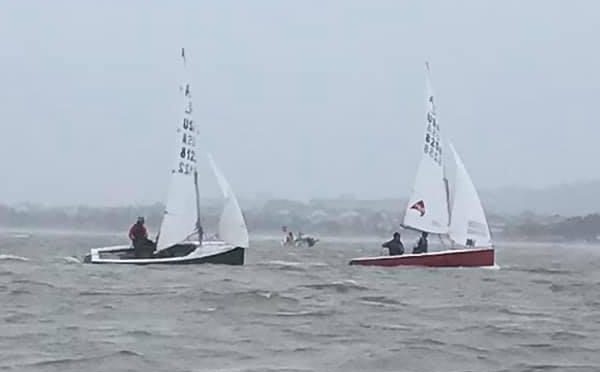 The 2021 PRSA Spring Regatta was held May 29 and 30 from the Washington Sailing Marina.  Eleven Albacores registered for the event.  With Covid 19 restrictions easing competitors were eager to race the first Albacore regatta of the year.  The weather unfortunately deterred some teams from racing Saturday.

Day 1
Day one sailing conditions were chilly for the time of year and rainy. Teams were in full foul weather gear.  Wind ranged from 12 -20 mph NE with gusts in the upper 20s.   Two Albacores raced.  Race Committee (RC) decided to combine all fleets racing on day one.  At the start line was two Albacores, two Buccaneers, two Lasers, and a Lightning.  RC held three races.  In all three races the RC boat was the favored end of the start line.   Having multiple classes on the start line that rate differently made finding a lane off the start important to maintain clear air.  The shifts on the racecourse ranged from 10 – 15 degrees throughout the day.  Playing the shifts was more important than getting current relief out of the channel.   The Olympic course with the wind speed helped the Albacores stretch out leads on other boats on the reach legs.  The two Albacores had a dominating performance against the other classes of sailboats.

Day 2
Day two sailing conditions were chilly without rain.  Wind ranged from 8 – 16 mph from the NW.  Five races were sailed with nine Albacores.  The left side of the racecourse seemed to be the favored side of the course most of the day with 10-degree shifts.  The pin end of the start line was favored most of the day.  Boats tacking on to port immediately after the start due to the racecourse bias were able to make early gains on boats that stayed on starboard tack.