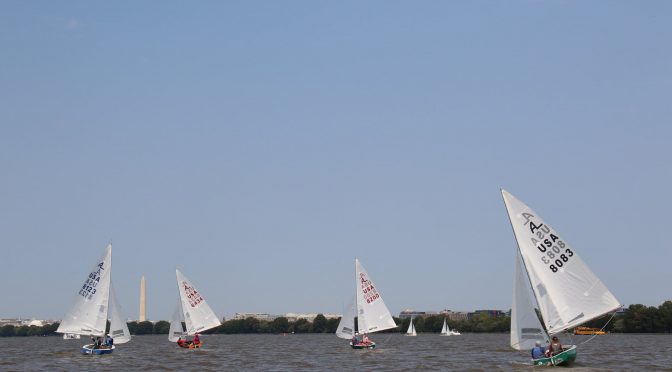 This year’s President’s Cup had 15 Albacores registered for 2 beautiful days of sailing on the Potomac River.  That’s not to say that the winds cooperated.  Saturday started with an hour delay from shore due to light winds.  The wind speed was up and down throughout the day, but the direction remained surprisingly steady.  The race committee managed to get 3 Olympic courses off with the last race being shortened.  That worked out well since just kept heading south to WSM for the on-shore after-party.  Whoo-hoo!  Dan Miller and crew Kaitlyn had a lot to celebrate since they got a bullet in the 3rd race!

Sunday’s winds were slightly higher (though still up and down), and were shifty… painfully shifty.  The RC got 4 windward/leewards off.  Farley and Celeste Will had a fantastic first in the 6th race, while Jordan Minot and crew Janice blew through the finish in 2nd.  Let’s not mention who got 3rd, but it was his throw out.

Speaking of Barney Harris, he and Lee took away the victory beverage holders for first place in the President’s Cup.  Lloyd Leonard got a well-deserved 2nd.  Greg Jordan got 3rd in a remarkable boat.  And special mention is in order for Daphne Byron and crew Jill who fought hard and won 4th, beating out former crew Lars Rathjen by 3 points.  If there was an award for the best-looking boat, that would go to Dave Huber, who sailed his work-of-art Woodwind with sons John (on Saturday) and Mark (on Sunday).  Congrats to all!