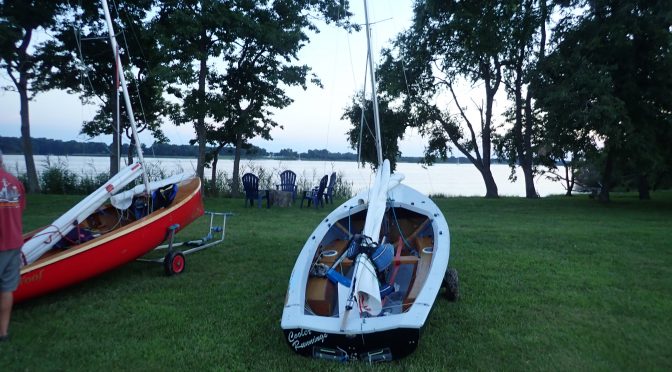 This year’s Corsica River Yacht Club Regatta was a bit different from normal.  Despite being an event on the Chesapeake Bay in late July, we actually had some breeze.  Saturday was light when we arrived and began with a postponement, but by 12:30 the breeze had filled in coming up the Corsica river and we were able to get in 3 races with wind mostly in the 10-15 range.  The wind persisted through the evening and night which made for a nice evening with no bugs and kept things feeling cool.  The dinner was a very tasty chicken dinner and the camping was actually pretty comfortable with the breeze (although those who camped by the river said it was a little noisy there with the wind and waves).  There were even free horse carriage rides on Saturday evening!  On Sunday the breeze persisted and we sailed an additional 4 races in winds that occasionally pushed into the upper teens.  Six Albacores raced overall with 5 out each day.  Congrats to the winners Marty and Jordan Minot!