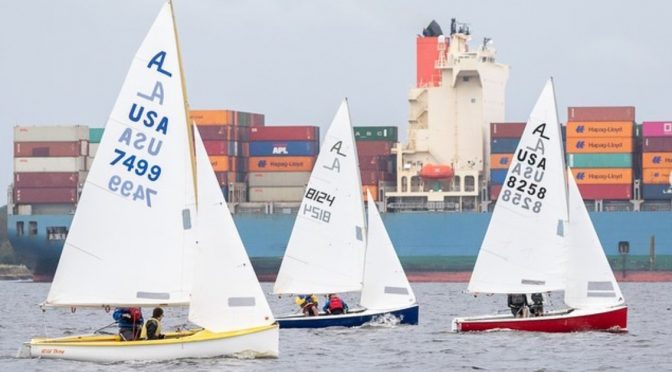 Albacore Nationals this year was certainly different than in years past.  Due to COVID 19, the normal contingent of Canadians were not able to cross the border for the trip which yielded some lower participation.  But despite that we still were able to get 8 boats down to race at Norfolk Yacht & Country Club this year.  It was very cool to get to race at a new venue!  I have not sailed there since college and it was definitely a little different than I expected.

We had lighter breeze for three days of racing which was quite tough with the currents that were ripping through the racing area.  One the last day, we were able to make it to the race course by sailing/drifting to the race course.  Then while waiting for the wind to fill in, the RC dropped a mark for people to tie up to so that we did not get sucked out into the Cheasapeake Bay.  The race committee did a great job getting races in for us despite the light wind.  We even had 1 protest which I thought the judges handled really well and did a great job running it.

All in all, I really liked the new venue.  with two ramps to launch from, there was basically no hold up and they were able to make room for us to store the boats right next to the ramps!  While COVID made the socializing a littler harder, some of us still ate at the Yacht Club restaurant and it felt pretty safe and was good food.  I definitely could see the fleet returning to this venue!  And I was totally jealous of the people who booked rooms at the yacht club and were able to just wake up to a view of the river and roll right over to their boat so easily!